TrueNAS SCALE continues with system count growth at over 100% per quarter since the start of the BETA process in mid-2021. There is widespread adoption by Linux admins and great feedback as TrueNAS SCALE matures.

TrueNAS SCALE is approaching half an ExaByte of data under management with very good data reliability since the software reached RELEASE status in February of this year. Each software update takes quality and reliability another step forward, as described in the software quality lifecycle:

SMB clustering has been a major focus for this particular release. Scale-out capabilities have previously been introduced by marrying gluster with OpenZFS. Currently, Samba 4.15 is used to build clusters of nodes that then share the scale-out clustered volumes. The effect is that an SMB client can access the cluster via any SMB node in the cluster. This allows for vastly increased bandwidth and capacity clusters that can grow to hundreds of petabytes and terabits per second. The TrueCommand 2.2 multi-system manager includes a wizard to simplify deployment of these clusters, which can start from as few as 3 nodes.

This tool often relied on drivers available in FreeBSD and not Linux. These drivers have now been ported across, and TrueNAS SCALE 22.02.2 adds support for TrueNAS appliances. The addition of this feature was needed before we could encourage our Enterprise users to consider TrueNAS SCALE for production.

The graphical UI for a TrueNAS M-Series is shown below. 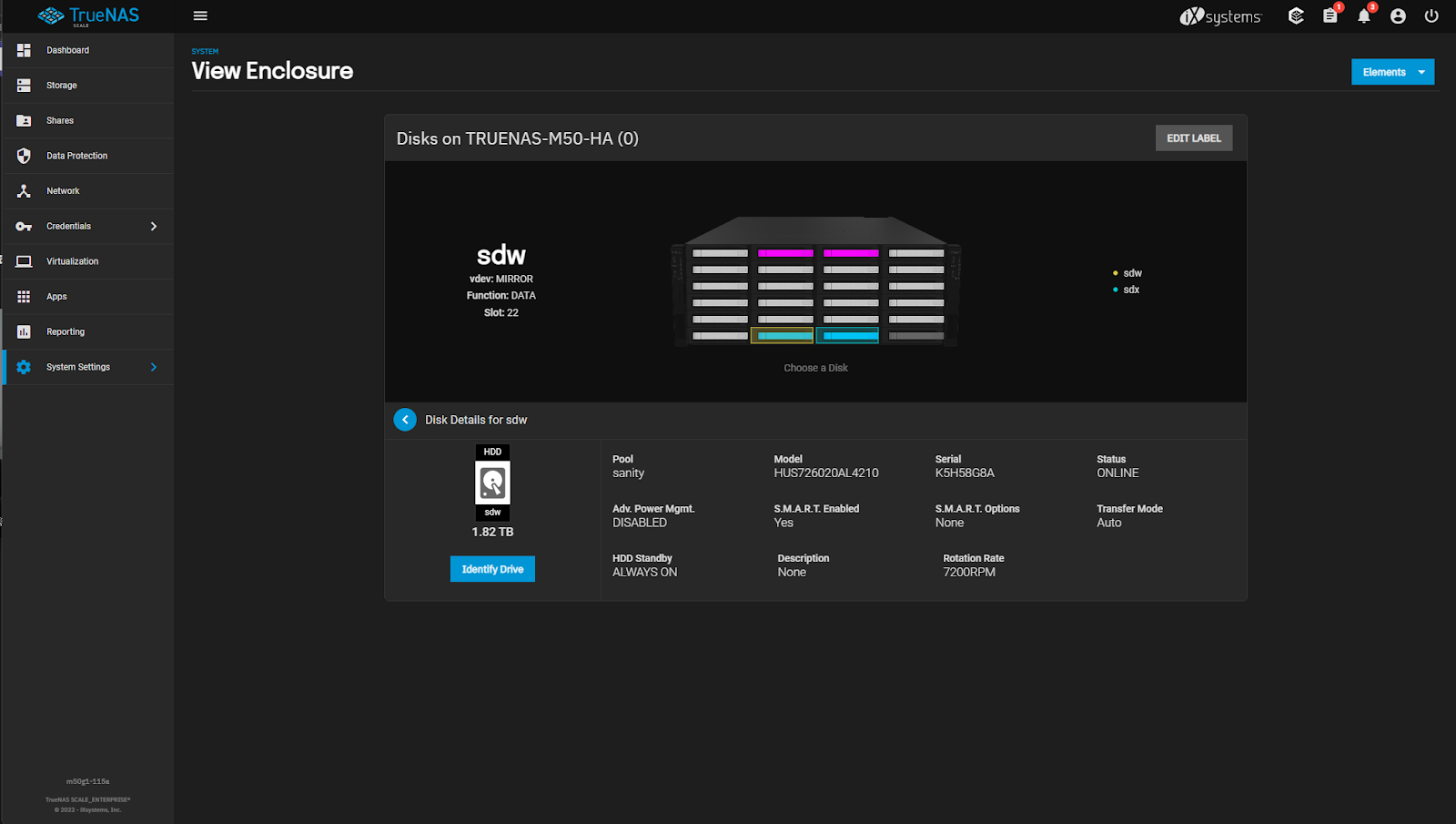 The details of TrueNAS SCALE 22.02.2 are in the release notes. There are over 160 new bug fixes and improvements that will provide another significant quality jump from the RELEASE version. Notable inclusions are:

We want to thank the community for the tremendous support in improving TrueNAS SCALE quality! It’s been an exciting ride and there’s so much more to come, so please keep reporting bugs and making suggestions as we continue to improve the quality of TrueNAS SCALE together.

Who Should Use TrueNAS SCALE?

At this U2 stage of its Software Development Lifecycle, TrueNAS SCALE is primarily for simpler deployments and tech labs. It is particularly well suited for users with Linux Apps and Virtualization requirements, in addition to standard storage needs. Users with scale-out storage requirements can start verifying for their specific use-cases or interests.

For Linux developers, there are many opportunities to contribute to the Open Source TrueNAS SCALE project, and we have a vibrant Discord Community for contributors. It is a well-coordinated and managed environment to collaborate in developing the best open hyperconverged infrastructure as a collective. In particular, contribution and testing of the next SCALE release is strongly encouraged.

“Bluefin” is the next major release after SCALE 22.02. It will include some major enhancements including support for ZFS backed cluster snapshots, optional FIPS 140-2 crypto support, and security improvements including rootless operation. For more information, see this community post.

For larger commercial users with scale-out needs, iXsystems has an Early Access Support Program to support specific deployments and applications before they complete testing and enter the production phase. Please contact your iXsystems Account Representative or email us at info@iXsystems.com if you are interested in trialing TrueNAS SCALE for production.

Production users with standard NAS (NFS, SMB, iSCSI, S3) requirements are still advised to use TrueNAS CORE and Enterprise, which have a hundred times more data under management and over ten years of operation and stability. TrueNAS SCALE has inherited some of that maturity and the automated testing but has not yet completed its enterprise software quality lifecycle.

In parallel, TrueNAS 13.0 (CORE & Enterprise) has also been released and will be the most robust scale-up storage platform. Update 1 to TrueNAS 13.0 is expected in the upcoming weeks and will be a very solid release.

If you have any additional questions or need advice on a new project, please contact us. We are standing by to help.