Updated guide for Fibre Channel on FreeNAS 11.1u4

With this, you can match the FreeNAS luns to the ESXi NAA identifiers very easily since the lun serial number isn't particularly useful from the VMware GUIs. I usually run this command, and then add the naa to the comments section.

naa's added for referencing them togehter: 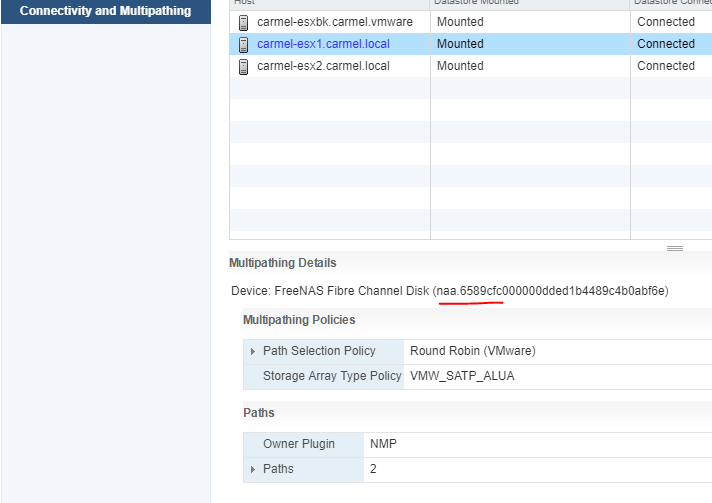 I am planning to use Fibre Channel on FreeNAS myself and have been doing a little bit of experimenting. I appreciate the How-To, but have one question. How would you go about using the hint.isp.0.fullduplex option? My current hard ware is Dell R610's, Force10 S5000, Dell R820 (for FreeNAS) and a Dell VRTX with M620 Blades. I am using Qlogic QLE2562 FC cards and Qlogic/Dell QLE8262 CNA's.

techknight1 said:
How would you go about using the hint.isp.0.fullduplex option?
Click to expand...

At a glance its a sysctl, so you could set it in Tunables as a sysctl type. However, based on my understanding fibre channel is always full duplex unless forced otherwise. Afterall you have two fibers, one for TX and one for RX. Its kind of inherent in fiber networking unless your looking at some esoteric single strand fiber ring topology.
EDIT: Looking at freeBSD isp(4), it should be set at boot time. set this to a loader value and not sysctl. See the man page for more information.
If you need help, please search before asking
=-=-=-=-=-=-=-=-=-=-=-=-=-=-=-=-=-=-=-
FreeNAS-12.0U3
Supermicro
128GB DDR3 RAM (32GB for FreeNAS)
Dual E5-2620 24 threads (4 for FreeNAS)
12 3TB 7200RPM Drives as 6 x Mirrors
12 400GB SSDs as 3 x RAID-Z1
VMware Certified Professional 6 – Data Center Virtualization

As a newbie to FC, this guide helped when I first tried with a pair of 4GB QLogic cards. I've since upgraded to a Chelsio T422-CR in my FreeNAS and Brocade 1020s in my virtualization servers.

My question is, what, if anything, do I need to do different to get the Chelsio to behave the same as the QLogics in the guide? I've got the Chelsio working with IPs, but my VM hosts don't "see" the storage as direct-attached, which is what I'd prefer if possible.

You lost me, you want FC or ISCSI over Ethernet?
I usualy stay away from multi standard cards, I do not trust a product wich can do al the standards, FC, FCoE, Ethernet. Usualy they don't excel in performance.
For Fiber Channel go with dual port QLE2562, in freenas and hypervisor also.
For ISCSI go with Chelsio (as they are recomanded for freenas ) and in the hypervisor with broadcom or intel.

Thank you, that actually answered my question. I was wanting to do FC (which it seems is what would present the storage as DAS to my VM hosts,) but the Chelsio card doesn't do that, it does iSCSI (which I've played with.

I can live with that, this is just a home lab and if it turns out I really do want FC I'll look at getting a new card to handle it.

The Chelsio cards are CNAs (Converged Network Adapters) so they can do FCoE (Fibre Channel over Ethernet) although I don't know if there's support in FreeNAS (or FreeBSD) for that.

I've never had a bad experience with QLogic cards so I'll second the suggestion by @Holt Andrei Tiberiu for the QLE2562s.

As a side note, I'm pretty sure you can approximate the end result of LUN masking by using NPIV if your switches support it. Then just create multiple portals and only present the extents to specific targets.
Do you have an SLOG device, or think you need one? Check benchmarks in and add more data to this thread.
Watch out for SMR drives. Not sure if you have them? Use this script to start.

As a personal note, I use FC, as it is designed for Storage Transport Only, never had a problem in the past 5 years with it, al my FreeNas are connected to either HOST or SW by FC.

iSCSI can often give you 80% of the performance for 20% of the cost; and if you're willing to spend like you would on an FC infrastructure (switches and cards designed for the purpose) you can get pretty much all the way there.
Do you have an SLOG device, or think you need one? Check benchmarks in and add more data to this thread.
Watch out for SMR drives. Not sure if you have them? Use this script to start.

I'm giving this a go, as I have some old components left over allowing me to build another standalone FreeNAS box, and have a couple of dual port 8Gb QLogic FC adaptors from work we no longer needed.

I'm testing with 11.2 off the bat, and whilst the adaptors show up in FreeNAS and ESXi, ESXi reports the adaptors offline, and all LEDs on both target and initiator adaptors are flashing. I think this means power on post init, but no link between the adaptors.

Could this be a driver issue within FreeBSD and 11.2, and do you think rolling back and using 11.1 might resolve this?
Or, do I need to make BIOS changes on the cards to put them into Point to Point mode?

EDIT: Either one of the ports on one of the adaptors is dead, or needs some kind of config change, as I just moved the fibre cable over from port 0 to port 1 on each card, and now have an 8Gbps link. Tests commencing....
Last edited: May 9, 2019

1. Flas the dualport adapters to latest firmware, something like 3.57
2. enter the adapter BIOS CTRL+E ( or something like that ) at boot, reset to default settings bothe adapters, since it is a dual port adapter, bios see's it as 2 individual cards, and in adapter settings, set comunicaton speed to 3 i think, 8 gigabit, do not leave on auto.

3. use minimum OM3 cabel. It is Turquoise collor. 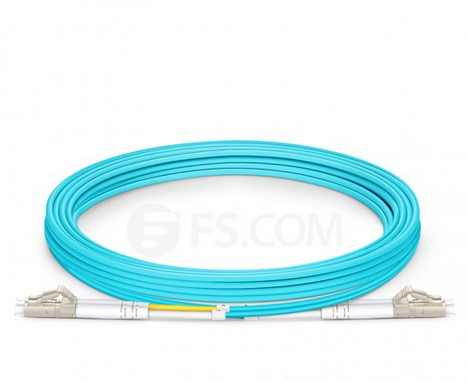 In freenas after install, u can do it with 11.1UX or 11.2UX you will need the following settings, be aware, in 11.2UX please login in legacy UI.

And then you will need ISCSI service set up: 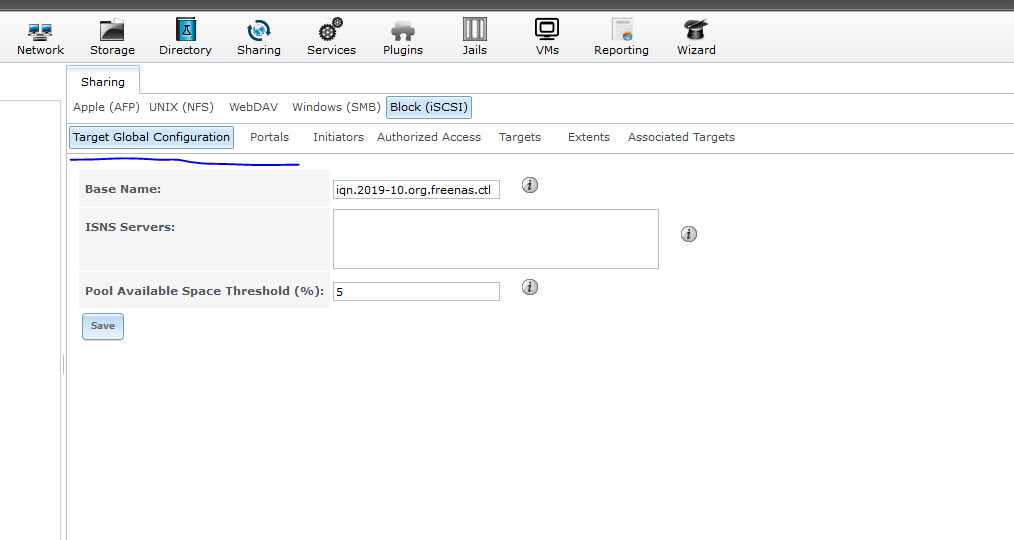 Note, first target created will have LUN0, second will have LUN1, if you delete LUN0, LUN1 will becom LUN0, and you will have a very bad day in VMWARE!!!!, it will see your FC Storage as a SNAPSHOT, so be aware, if you are using only 1 target, you do not have any problem.

And do not forget to set round-robin in vmware for that storage, because if wou do not, it will use only 1 FC adapter: 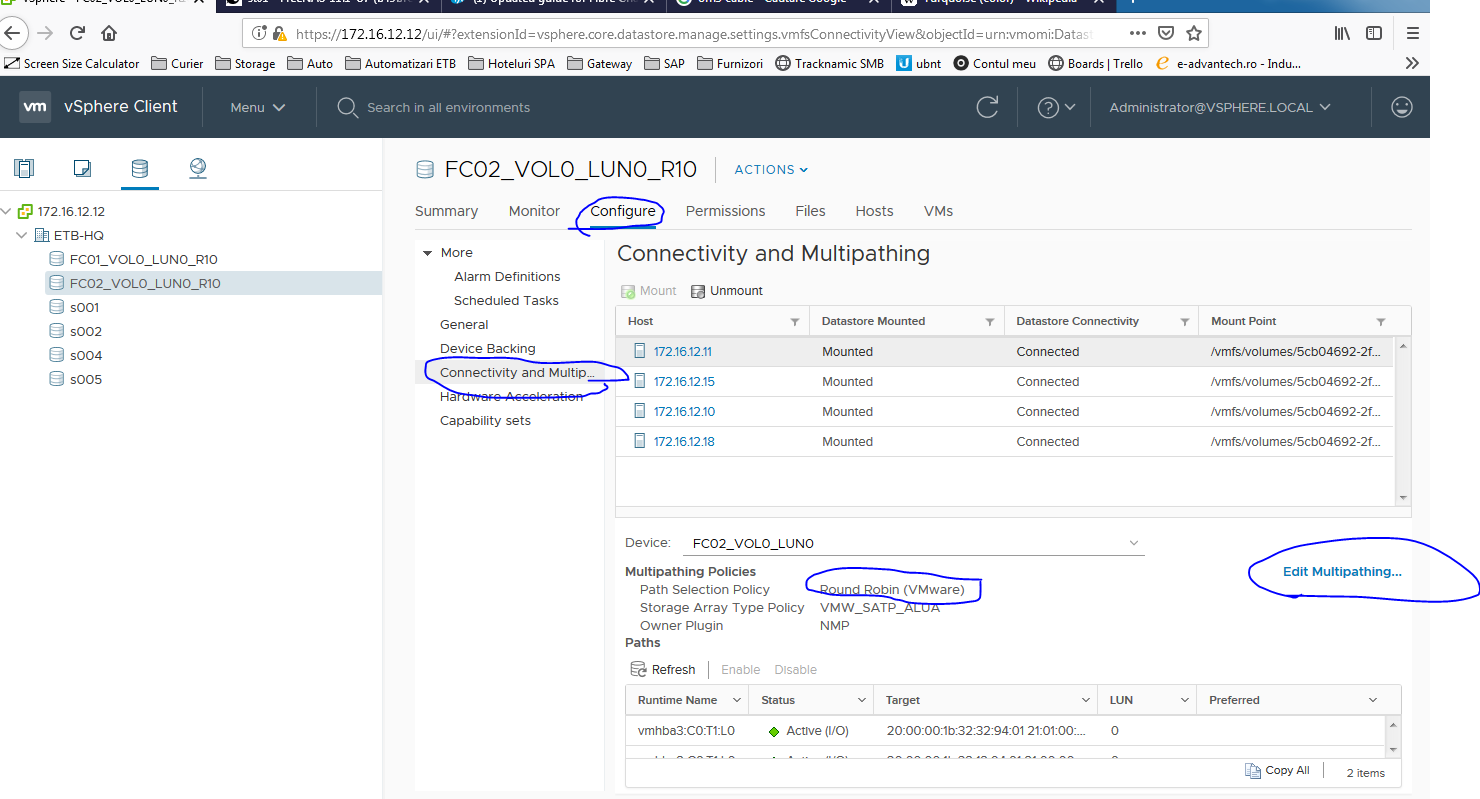 Sorry for late response, yes, iSCSI over ETHERNET has some more demanding hardware requirements to work stabel. I am talking about PRODUCTION not home use, for home use you can go with 1gig, or wathever.

In production, FC has it's benefits, it is more simple to maintain and setup, it is the most stabel of the 2 ( ISCSI LAN and FC )
iSCSI over ethernet, to reach 10 gig / hypervisor is a little more triky.
You need to have good support from the lan cards, or iSCSI passthrou, TCP Offloading, solid driver support, and so on, or at least 1 of them :) .
Also the SW has to be good brand and quality, if you have 16 port's, that is 160 gigabit internal lan swiching power, also there are some SW wich have dedicated firmware for iSCSI.

But my friend is working at a company doing big implementations, and they use 10K USD 10 and 40 gig SW for iSCSI, they work like a charm, but that has a price tag. Interesting is that they still prefer 16 gig FC, because o lower latency and Throughput on hypervisor and sw, much lower.

FC is a storage protocol, it was designed as one.

iSCSI being a LAN TCP comunication, it is exposed to BROADCAST and other type of lan-related problems.
Having 10 gig SW and using it as only iSCSI communication is the best way, but is more expensive than FC ( at sekond hand ) at new it is the other way arround, FC being the more expensive solution.

There is a reason that FC is present in Freenas, an other storage types only in paid appliances, it is eneterprise specific use case.

We all thank that there is e-bay and amazon and other's, and that companyes change their infrastructure once a few years. You can get eneterprise hardware after 3-5 years at 10% of the original cost.

So i went FC, fewer problems, none.

I am not saying or implying that iSCSI will not work, or it is much slower than FC, for me it was, but again, maybe i did not have the correct combination of lan card/driver/firmware and sw settings. ( I even trye'd 2 x 10 gig LACP, oh boy, did that go wrong... )

Unti today i converted 4 of my friend's from 10gig ethernet to FC, until now, none complained.

kdragon75 said:
Do you mean to imply that you were using "blocking" switch's? There is nothing special about a switch that handles iSCSI. The only things I can think of are non blocking bandwidth on the backplane and bidirectional flow control. Even then I have no issues pushing 20gbit through any 10g switch. Granted I'm not connecting 12 hosts to 12 targets and maxing them all out. I just don't have the hardware or need for that.
Click to expand...

Hey all, thanks for the great info and howto.

Unless I've done something wrong, it seems that each host connected to Freenas sees ALL extents? Is there any way to tie specific hosts to extents?

I have a fairly simple setup. 2 ESXi hosts each with their own FC card. My FreeNAS box has a dual port FC card, one port per host. After adding a datastore to a host, it shows up on the other host. The ESX hosts are not in a cluster, just part of the same "datacenter" instance.

Is this expected?
You must log in or register to reply here.

Nov 20, 2011
StandardAtomic
S
S
The proper way to configure a Fibre Channel connection between a Windows 2019 Server and FreeNAS

Can't get 2nd port of QLogic FC card to connect.