My (mis)Adventure with the Supermicro X10SDV-4C

Recently I re-built my NAS based around a UNAS 800 chassis, Supermicro A1SRI 2758 board and a bunch of components I picked up in an eBay auction. This system worked wonderfully, however it didn’t check one of the boxes I had the new build, which was 10Gb networking.

I eventually settled on getting a Supermicro X10SDV-4C-TLN2F solving for the onboard 10GbE side of the argument. This was mostly because it allowed for the simplest internal design changes, just swapping out the motherboard, rather than having to route 8 new discreet SATA cables if I went for the SATA motherboard option.

The installation was as simple as expected. The only unforeseen issue was that Supermicro have, bizarrely in my opinion, swapped the USB3 header on the older A1SRI series Atom board a slower USB2 header on the newer Xeon D X10SDV range. This required to small adaptor to keep the front USB port working (albeit sadly at USB2 speeds).

That was about the last good news for this build however!

As I had 64GB in brand new ECC memory, the first thing I did was fire up MemTest86. On the MemTest menu screen I noticed the ‘CPU Temp’ was showing: 101C – my brain could not comprehend that a system that had only been running for 5 minutes at idle could be running a CPU temp of 101 degrees Celsius so I dismissed it as anomalous and got underway with the test.

4 minutes into the test, the system crashed and rebooted, then refused to POST… until it cooled down. Wow. This is was serious, when it finally came back, IPMI was showing CPU temp at 105C.

The mind boggled. So the exhaust-only cooling design that had kept my Atom 2758 20W TDP system at less than 40C die temp at idle was unable to keep the Xeon D 1521 45W TDP system as less than 100C die temp at idle! I was honestly shocked, I knew the extra wattage would mean higher temps, I had not predicted anywhere near this high. I have run 35W processors in entirely fanless systems at 60C temps so I thought that with the two 12cm exhaust fans on the UNAS chassis the airflow would at least keep the 45W Xeon D chip around the 60C mark. Not so.

Googling the matter led to a lot of material on people experiencing similar issues. It appears that while SM supply the Xeon D with a puny passive cooler, it actually needs highly active cooling design around it. If you’re building a 1U unit with multiple high-flow fans blowing air directly over the heat-sink this indirect airflow design will probably be fine. However inside the UNAS case there is no way to build an airflow design that would achieve this, so unfortunately, direct cooling is the only way to go.

Allegedly due to influence from the STH community experiencing similar issues, SuperMicro started to produce a drop-in active cooler replacement for the X10SDV range, namely the SNK-C0057A4L however this runs to nearly $40 with shipping and from the photos it just appears to be the stock cooler with a cheap brand fan screwed on top. I was certain I could do at least as much as this for less.

I had a spare 60mm fan lying around (actually from an old SuperMicro MicroServer case) and it fit exactly over the heat sink. I pondered creating an elaborate metal harness for the fan to screw in to, but having experimented with using zip-ties I found I could achieve a very tight clean fit by just looping the zip ties around the legs of the heat sink.

If you ever try this, note that there are a fair few soldered components hidden under the edges of the heatsink, so take care when manoeuvring the zip-ties under there. 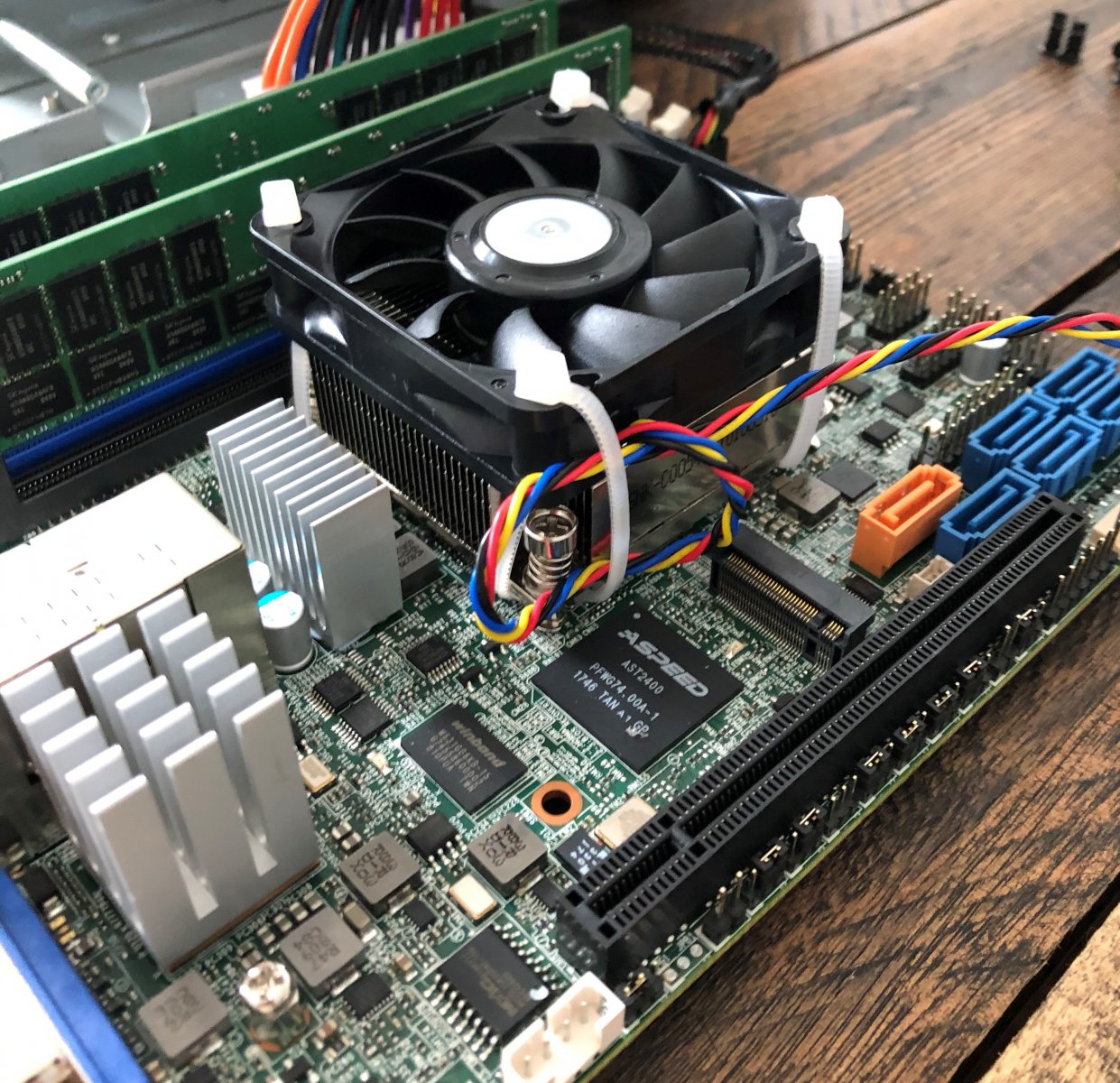 Not a bad result for $0 spend. 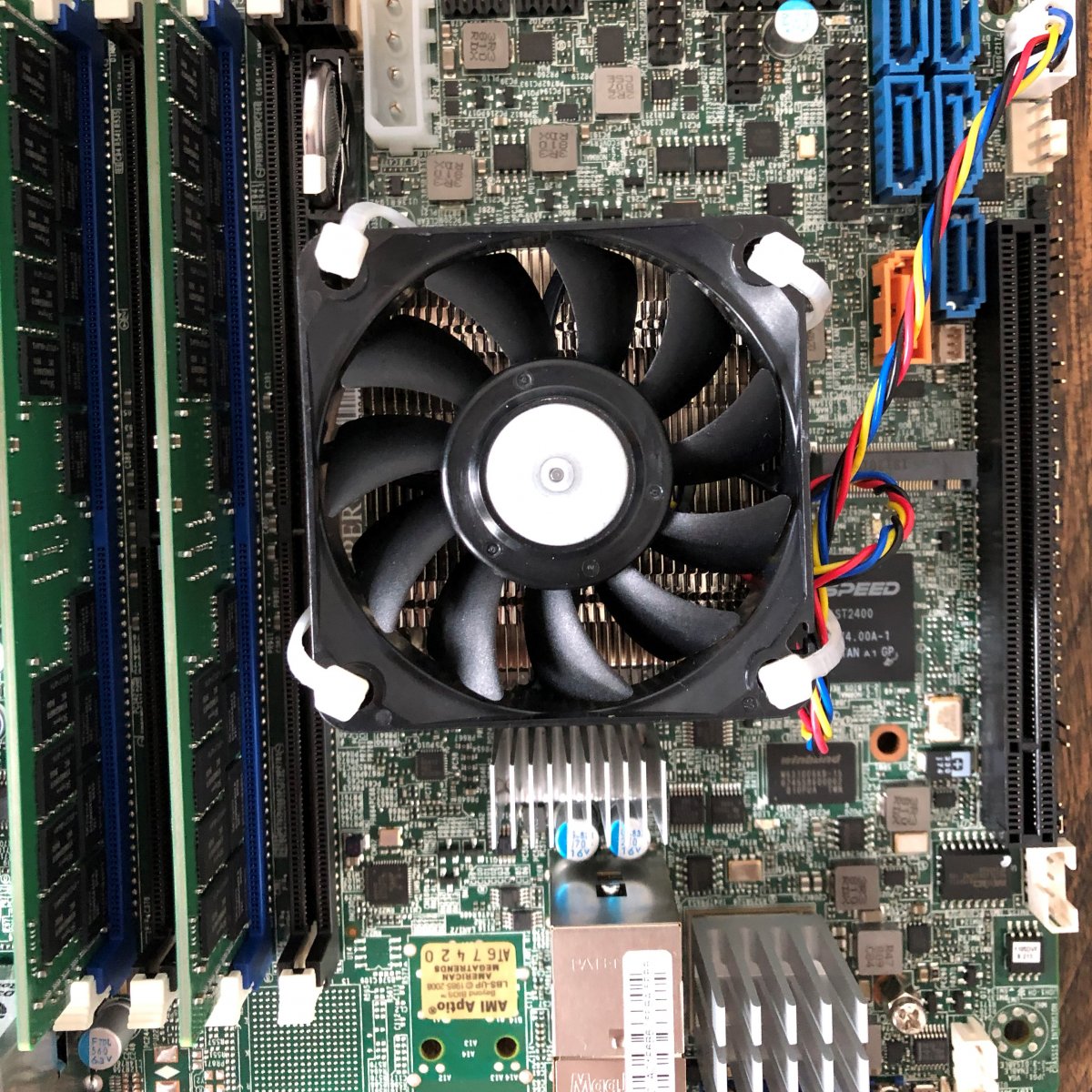 Booting up, I was pleasantly surprised to find that the temp was dramatically reduced to under 40C at idle and around 50C under typical NAS load. Big win.

One thing to watch is whether that temp change also works in your closed case. Looks like there are several other components with tall heatsink fingers expecting a rackmount-style airflow going through. The little one by the CPU will be okay. the taller one not so much... and with the case closed you may only get recirculation which won't cool effectively.

Just stumbled on this looking for info on something else with this birds, but I did want to day, I had the exact same issue with mine, except it took me a day or two to figure out why I couldn’t post.

And like you, I luckily had a 60mm fan lying around and that’s what confirmed it all for me.

My build report (from before my switch to truenas) : https://www.reddit.com/r/homelab/co...urce=share&utm_medium=ios_app&utm_name=iossmf
You must log in or register to reply here.