Stux said:
I think FreeNAS should be cleverer and sort it out for you
Click to expand...

At the very least, the GUI shouldn't lie to you. If selection in the GUI is by device number, but internally it uses some other identifier, it's inevitable that people will end up with drives not being tested.
Dell PowerEdge T20 | Pentium G3220 @ 3GHz | 32GB
RAIDZ1: 3x CT2000MX500SSD1
boot: Samsung 840 EVO 120GB
UPS: CP850PFCLCD
Ubuntu Server | Webmin

SMART is not the whole story
T

Meanwhile I've managed to get the drive replaced for free without any problems. They confirmed the SMART readings and sent one back the day after. So now I've gotten a new WD Red with 0 hours and NASWare 3 (old one was 2). Probably doesn't matter, but still nice.
Bought a spare one as well to prevent such a long downtime in the future.

Did some proper testing/burn-in when I got both drives using this guide. Took 3 whole days for badblocks to complete on these 4 TB drives. 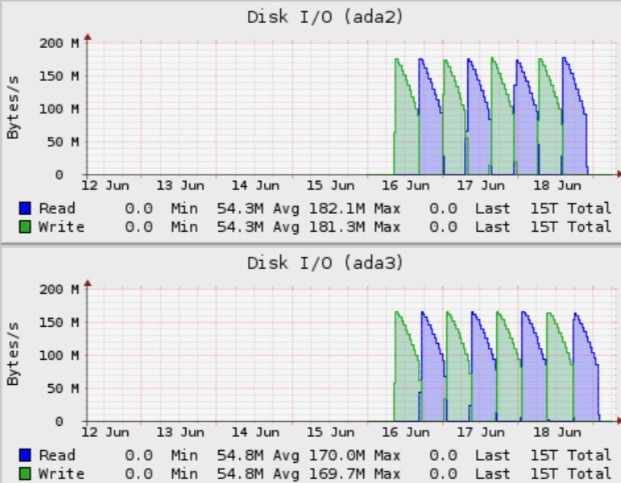 It completed a few hours faster on ada2 compared to ada3 even though the test started on both at the same time. Long SMART test afterwards ended without errors.
Replaced two of my drives with the new ones, and resilvering went without any problems.
It's been running without problems for a few weeks now, and all seems fine (SMART & scrub).

Finally I also made sure all drives were selected in the (short/long) SMART periodic tasks. I've just checked the output, and it's being executed on schedule now.

If anyone has the same problem, can't RMA, and is also unable to fix it using badblocks or dd by forcing a write to the bad sector(s): try this freenas post (set offline, wipe, resilver).
I can't vouch that that will work, but it'd have been my last resort. I'll be sure to try it once one of my other (old) drives starts giving bad sectors.

Trying to write zero to sector?