Hey i'm new to freenas, after watching vids and reading stuff online, i did my first install and it went great. Here's the problem i ran into though. I used 2 120GB SSD's as boot drives and i was under the assumption that i would be able to use those SSD's for installs of plug ins or maybe even a small boot disk for a vm. Now when trying to install a plugin all i see is the data storage pool i made, not the 2 boot disk mirror.

Am i overlooking a function that needs to be turned on or is it just not possible to use those mirror'ed disks after you install freenas onto it?

Standard, intended, FreeNAS behavior is that the boot drives are exclusive to boot function, not to be used for data.

However, there is a more advanced, unsupported, way in which space can be reserved on a boot drive for other purposes.

You will find it described here: https://www.ixsystems.com/community...-of-larger-ssds-for-boot-pool-and-data.81409/
J

Thanks for the reply! Trying it however i ran into a snag, at step 7 where you wipe the old install from the ssd's and do "gpart destroy ada4".
I get "gpart: Device busy", i've seen recommendations where people say to use the dd command to write the first and last part of the disks and i tried those but it didn't seem to work, every other step so far went fine.
J

So i have been trying and googling for awhile now and while i know it's an unsupported "how to" that got linked i'm still curious about some of the hickups i've been running into. But i got some questions that don't seem to give an answer googling around.

One of the problems i ran into was "operation not permitted" when trying to do "zpool labelclear ada0", which i found could be solved by using fdisk command (for example i used:"fdisk -1 /dev/ada0) and i saw the result they got was very different from mine. Now is it possible that HDD & SSD give different results on the fdisk command?

It was mainly annoying because they advised using " dd if=/dev/zero of=/dev/sdc bs=512 count=100 seek=976773068 ". So after looking up what it all ment, i tried doing "dd of=dev/ada0 bs=512" Because i know the disk id and from my fdisk result i knew sector size was 512. But the "if=" command i didn't think i needed so i left it out, i also tried to do the command with "count=100" but also got not permitted on that attempt and finally the seek part was left out because i could not see any sectors in the fdisk command. Hence why i asked if HDD will give a different result then an SSD.
J

Figures below won't work with BIOS for partitions not in cyl 1
parameters to be used for BIOS calculations are:
cylinders=232594 heads=16 sectors/track=63 (1008 blks/cyl)

I was able to install FreeNAS-11.3-U2.1 for TrueNAS-12.0-U4 on an 8GB partition of my boot-SSD by modifying the install script. I have my jails on the boot-SSD and other fragmented temporary files. Though I only have one boot drive, I successfully used this method with a mirrored boot drive in a VM.

I saw methods (1,2) using USB drives and mirroring but didn't have a small USB drive and I thought my method below was more straight forward. This guide assumes an UEFI-boot, though it might also work for a BIOS-boot but I didn't test that. I have been running this configuration for a year without issues. I don't know what side effects this may cause, so use at your own risk.

Step 1: Install your future boot drive(s) and start-up the ISO install media. At the install menu enter the shell.

Step 2: Change directory to the install script location. Grant yourself write permission to the script and open it in a text editor. In this version of TrueNAS the code you want to change is inside the "create_partitions" function at line #511.

Step 3: Replace the size variable with the size you want your TrueNAS boot partition to be. The example below uses "-s 8g". Save the changes and exit the text editor.

Step 4: Execute the modified install script. During the install select one drive or more drives. Select multiple drives if you want a ZFS mirrored TrueNAS boot partition. If your drive is big enough the script will still ask if you want a swap drive or not.

Step 5: After the installer finishes, return to the shell. Optionally do this step in the TrueNAS GUI shell or SSH. Check if everything worked. There should be some free space on you boot drive(s) and a zpool. Note the devices and partition numbers in gpart. If you added a swap partition during the install your partition numbers will be one higher than the example code below.

Step 6: Create partitions with the remaining space. Specify the partition size (-s). Optionally you can align the partition or specify sector sizes with additional gpart arguments.

Step 7: Create a pool with the new partition(s).

or mirrored if you used multiple boot drives

Thanks for that, good to know there is another way to do it.

So that how to guide that got linked first, i finally got it to work. For some reason my usb stick got included in the original ssd mirror, no idea why. But that's what blocked alot of stuff and my inexperience with freenas probably didn't help either. In the end i pulled out the SSD's from the machine, connected them to another one, formatted both, reinstalled freenas on the usb stick and then i tried the how to guide again. Worked perfectly, all commands worked (did mess up with some typo's a couple of times but nothing with lasting effects), was able to import the config & import pools.

Thanks for linking the guide, i learned alot trying to figure this one out!
E

Hi! Thanks for this excellent guide!

I'm a TrueNAS noob and I'm preparing my home / small office NAS for the first time. I followed irTwits guide above and managed to install a 32GB partition of TrueNAS on a 250 GB SSD. It works perfectly when installing TrueNAS without a swap partition, but unfortunately I run into an issue creating the pool of the remaining space, when installing with a swap partition (which is what I would like to do).

Code:
This looks good to me, but when running the command in Step 7 "zpool create tank ada0p4" I get the following console message (time stamp removed):

Code:
Note that the argument is correctly given as ada0p4, but the message says ada0p3!
Then, when running the command in Step 8 "zpool export tank" I get the following console message:

Code:
Lastly, when doing the import from the TrueNAS GUI, there are four more console messages:

It seems to me that these operations should be executed on ada0p4 but somehow were pointed to ada0p3 instead. This would explain why the installation went fine when installing without the swap partition, where the manually created partition actually becomes ada0p3 and not ada0p4.

What can I do about this? Is there anyway to find out if these console messages are significant or not? Is there a way for me to fix this?

Any help is appreciated!
Thank you!
J

I'm no expert but step 7 has the command " zpool create tank ada0p3 " are you sure you adjusted it to zpool " create tank ada0p4 "? I mean typo's happen quickly especially when you aren't familiar with this stuff yet. I know i sure made alot of them.

Since there's no data on it yet ( i assume there isn't since the import failed) maybe you can just try again? Again i'm no expert but that's what i think happened. Also i don't know if people will read this since it's a different problem then what i had, it might be better to create your own topic and link to this one or copy over the guide you followed so it's clear to people that are trying to help.
E

Thank you for your reply!

Maybe I wasn't clear though. I haven't run into any problems other than the console messages. The import of the new pool worked fine and I can share and access the drive from the network. And you're right, there is no data yet, so I could reinstall again if I have to.

As you say, I will create a new topic if I don't get any further response here. Good point. Thanks!

eysimir, I went through my instructions just now with TrueNAS-12.0-U4 without any problems. I'm not sure what's causing the issue your experiencing. 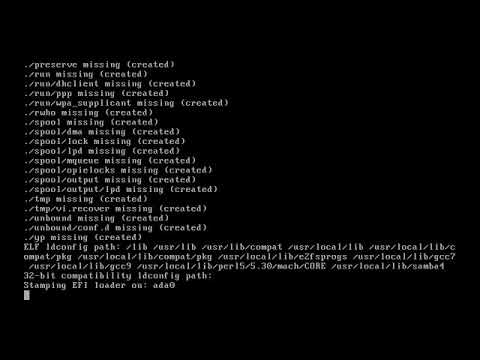 Thanks for your answer!
Except from the size of the boot partition (which I suppose is not the issue), the only difference in my install is that I did everything from Step 6 and forward in the TrueNAS GUI shell. Do you think this could have any significance?

Also, when doing a re-installation, there are a couple of additional install steps in the installation script, asking if I want a fresh install or not, and when creating the partition I also need to use the "-f" flag because it warns me the previous ada0p4 partition might be used. I don't know much about FreeBSD command line partitioning and formatting. Do you think I need to clean the disk further before re-installing? If so, how should I do that?

The partition sizes shouldn't matter. Also, I was able to successfully perform the guide's commands in the GUI shell.

As for reinstalling, you can destroy existing data on the drive by selecting Fresh Install and select the Format the Drive option to get rid of the previous install. In the shell you can also try deleting the partition and recreating it.

I did a re-install again. This time I deleted partition 2, 3, & 4 before the installation, so this time I didn't get the question of a fresh install. I exited to the shell before reboot and did Step 6-8 from there. This way I didn't get the "Operation not permitted" during Step 7 & 8, but I still get it when importing the pool in the GUI after reboot:

Sidenote: When creating the new pool I had to use the "-f" flag because of the old "potentially active" pool.
I also got this message:

Code:
So, naturally "umount /tank" didn't work, but the pool was still created and exported without problem.

eysimir said:
I did a re-install again. This time I deleted partition 2, 3, & 4 before the installation, so this time I didn't get the question of a fresh install. I exited to the shell before reboot and did Step 6-8 from there. This way I didn't get the "Operation not permitted" during Step 7 & 8, but I still get it when importing the pool in the GUI after reboot:

Sidenote: When creating the new pool I had to use the "-f" flag because of the old "potentially active" pool.
I also got this message:

Code:
So, naturally "umount /tank" didn't work, but the pool was still created and exported without problem.
Click to expand...

Ah, ok. I suppose it's good that we get the same result, but unfortunate still that there is a problem.
I'll make a separate post with this issue to see if we can get any additional information about this.