I am wondering why nobody discusses the performance of VMware virtual disk 2.0 within freebsd.
I checked many many posted dmesg outputs in this forum as well as in freebsd and xigmanas: all posted protocols are showing reports like following:

In my case (example) we are using 12Gb/s disks in esxi and provide RAID6 based datastores to VM.

=> Yes, ZFS and direct disk access is recommended, but why does nobody wonder about this poor performance?
=> Does anybody know a solution for this issue?

Is this an issue at all? I mean, have you measured the performance? VMware emulates a particular hardware SCSI controller model and connected drives. FreeBSD knows this technology to be 300 M/s. Hence the boot message. I wouldn't be surprised of you got higher speeds in reality - as long as the underlying real hardware can deliver them ...
People who think they know everything are a great annoyance to those of us who do. (Isaac Asimov)

ERM-Consulting said:
It is obvious that all VMware Virtual disks 2.0 only provide 300.000MB/s.
Click to expand...

That's "obvious" to you?

Or are those just the flags that are passed to the mpt device driver, which VMware is emulating?

When you are using a device that is emulated, you inherit the behaviours of the driver that goes along with it. For example, the mpt SAS driver in FreeBSD conveniently tells you what speed the device is attached at. But since the device is not real, and yet the driver is designed for real devices, the fastest of which are 300MB/s, VMware decided to have it report the fastest speed available.

It is clearly capable of going much faster than that, and if you stick an mpt-based vmdk on something like an NVMe backed datastore, it will happily go in the multi-gigabyte-per-second range.

This is just like how the em0 driver goes "much faster than 1Gbps".

We lose about 1/4 of performance due to VMware Virtual compared to passthrough disks
Click to expand...

That, on the other hand, makes complete sense, as it obviously should.

[mod note: this is a basic virtualization theory discussion, and has nothing to do with TrueNAS or even FreeBSD performance. As such, I am moving it to off-topic -jg]
E

Facts:
Attaching same disks (Seagate 12GB/s), same server (Dell R730) with HBA330 per passthrogh to trueNAS in VMware we get 1,67 GB/s
copying from one disk to the other. 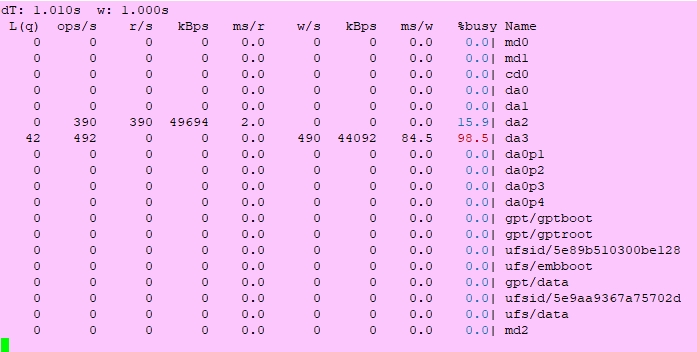 But that is not due to any artificial 300 M/s limit. It's due to the fact that FreeBSD thinks it's talking to a SCSI HBA with all the protocol overhead, queueing and interrupt handling necessary, and VMware pretending to be just such an HBA in software painstakingly emulating the other side of that complex and completely unnecessary protocol, and finally figuring out which block on the real disk FreeBSD wanted in the first place.

That's why paravirtualisation exists.
People who think they know everything are a great annoyance to those of us who do. (Isaac Asimov)

ERM-Consulting said:
Facts:
Attaching same disks (Seagate 12GB/s), same server (Dell R730) with HBA330 per passthrogh to trueNAS in VMware we get 1,67 GB/s
copying from one disk to the other.

So you use a crappy RAID controller which gives you a slowish datastore and you don't get a lot of speed. And you're using disks as well.

One of the problems with hypervisors is that you get a lot of complicated effects. For example, if you create a brand new thin provisioned disk on a datastore, and attach that to a FreeBSD VM:

But what's happening here is that ESXi's thin provisioning code is creating artificial zero-filled blocks and then feeding it via the mpt emulator over to FreeBSD. This, incidentally, is the classic proof that your original post's point is simply wildly incorrect. There is no artificial throttle at 300MByte/sec. FreeBSD is showing you that it can actually communicate an entire order of magnitude faster than 300MBytes/sec via the mpt driver.

But this is a highly optimized case. In actual practice, what actually happens on a datastore is much more complicated, and rarely performs this well. When you ask a vmdk to read what appears to be a sequential list of LBA's, you don't know how that was actually stored. If it was written noncontiguously, it isn't going to read it as fast as a raw disk device would, because there are seeks. If you've taken snapshots, you again have a situation where you will have noncontiguous data. If you used thin provisioning, this is very likely to result in noncontiguous data. All of that results in seeks, which significantly impacts performance.

If you are expecting a vmdk to perform similarly to a raw disk device, you need to start with an empty datastore, and you need to use thick provisioned eager zeroed mode, and you must not take snapshots. In such a case, you can get a good fraction of the speed of the underlying hard disks out of the vmdk, I'm guessing you might be able to get 50-75%, I'd be pleased to see even more, but I'm kinda cynical.

But even then, the fastest hard disks out there only deliver about 250MBytes/sec at peak speed, so that's still going to be less than 300MBytes/sec.

There's other stuff in your posts above that are clearly incorrect; Seagate does not make 12GB/s disks (although they do make 12Gbit/sec SAS disks), and it isn't possible to get 1.67GBytes/sec copying disk-to-disk unless there's some sort of caching going on.

Anyways, I've demonstrated that the "300MByte/sec" SCSI channel actually works at ten times that on the FreeBSD side, so any complaints you have are actually related to ESXi datastore performance on the ESXi backend. You are welcome to continue to discuss ESXi with us here in the off-topic forum. I don't really have a lot of time to be bringing folks up to speed on the ins and outs of virtualization I/O, but we do have a number of exceptionally knowledgeable and experienced people with lots of clue, including @Patrick M. Hausen and others.

As a final note, one of the reasons a lot of ESXi admins end up here is because they want to make use of ZFS to accelerate their virtualization environment. ZFS is able to do a lot of crazy things for ESXi performance, but you have to throw quite a bit of resources at it.
You must log in or register to reply here.
Share:
Facebook Twitter Reddit Pinterest Tumblr WhatsApp Email Link
Top