Hello everyone, I made a post here a few months ago about a prospective AMD build. Now that I've been using the server for a while I thought I'd give an update!

1) I specifically did not go with a typical server rack because of space and noise requirements.
2) Going with a more modern setup (and DDR4 ram) made the project more expensive. Due to my requirements this was fine.
3) I have other requirements than simply using plex. I spin up multiple VMs for testing Ansible scripts, I have a setup to automatically compile Rust and Nix binaries whenever I push code to my repo, and I run multiple games like minecraft from time to time. Etc.

I chose this setup because I plan on getting more drives in the future (I have a spare one now), and I didn't want long rebuilding times when a drive failed.

Services that I run in jails:

If you're interested in the minecraft setup, I wrote about it here.

I also use RancherOS in a VM to run docker services, of which I have 5:
---

My favorite services so far are Huginn and Syncthing. I was using Sync before, but it was quite slow. I keep personal files synced between my server, my main desktop, and my thinkpads.

Huginn is way more powerful than IFTTT. I set up email and pushover alerts for things like rainy weather, if any of my websites goes down, etc.

The only thing I -don't- use the server for is monitoring metrics, because if something happens to the server, then I can't view the metrics... So I put Prometheus and Grafana on a fresh install of raspbian, on my pi4. Now I feed it metrics from node_exporter and my minecraft instances: 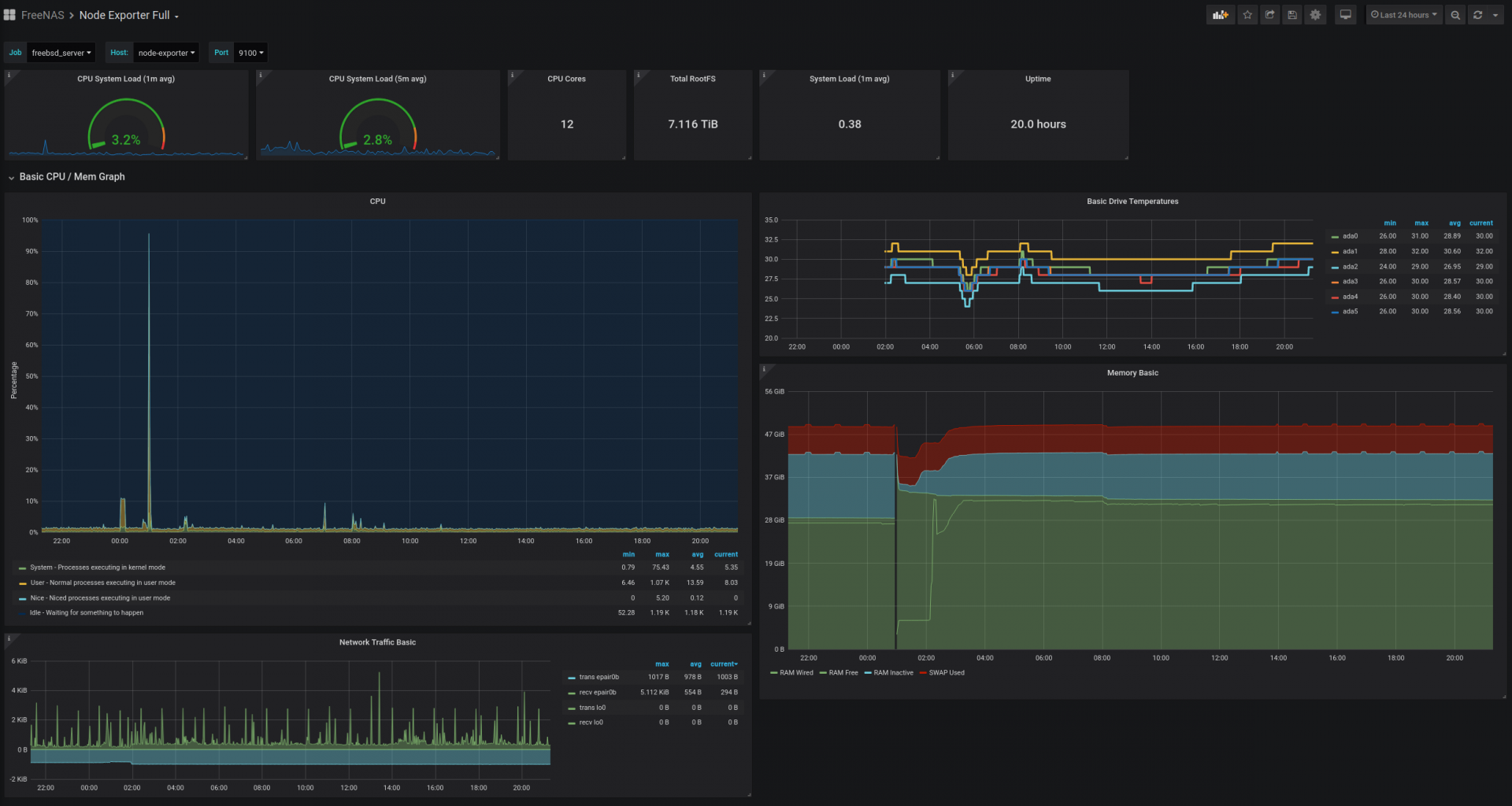 I haven't had any real issues with using AMD other than not being able to see disk temperatures with smartctl. I can see them in the GUI, but I needed a way to get those programmatically within a jail. So I wrote this script:

I run it every 15 seconds with a staggered crontab:

When I feed it into Grafana from Prometheus, it looks like so:

Pretty nice, if I do say so myself.

I -should- have saved the commands into shell scripts for posterity, but oh well. Configuring jails is easy enough. With plex/bazarr I created a system user, and in the jails I created a user/group with the same ID to avoid r/w conflicts.

That's my build. I've been really happy with it. When I have more space, I'd like to build a proper server rack.

Let me know if you have any questions!

tagging @maniyer since they requested it
R

Thanks for the update!
Would you happen to have any power draw measurements for the system?
You must log in or register to reply here.

Feb 23, 2019
ChrisReeve
C
A
How to edit YML files in Prometheus Docker container?