How to relocate swap to the boot drive

Overview Reviews (5) Discussion
FreeNAS by default will allocate 2GiB on each pool HD and use this as swap. Unfortunately, if a disk fails, your system may crash.

If your boot devices is more reliable than a USB, and you have the space, it may be beneficial to relocate swap to a swap file on your boot device. An alternative is to use a dedicated swap device, or partition, and that approach is documented here

Note: putting swap on a USB flash drive is not a good idea.

At the same time it is beneficial to leave the default pool swap where it is because it allows you the ability to replace a failed HD with a similar HD which may be slightly smaller.

The tricky part is that FreeNAS rebuilds the swap config every time you reboot.

There is a simple solution :)

Firstly, you need to create a swap file on your boot drive.

The following procedure is documented in the FreeBSD handbook

Execute the following commands in a shell:

If you want to verify the swap file creation, you can use the following command
ls -al /usr/swap0

and when executed the output should look something like this

Adding a Post-Init command to relocate swap from the pool disks to the boot disk.

The next step is to add a Post-Init command to relocate the swap every time your system reboots.

Then add a "Command" where the command is the following 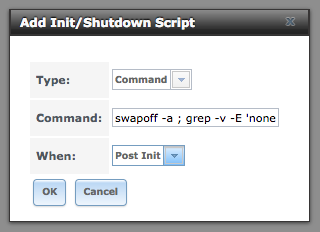 And you can check the /etc/fstab too
cat /etc/fstab


Why do it this way, and not another?

This method of disabling/re-enabling swap does not require you to remove swap partitions from your pool drives, it makes no permanent changes to your installation, other than the creation of a /usr/swap0 file, which can be removed at any time, and it will not fail and accidentally use a precious data disk as a swap device.

It will also not affect the normal FreeBSD swapon/swapoff functionality, which means it will also work with my page-in-swap script.


What do I do if I want to increase my swap size?

Replace 4096 with the new size you would prefer, and run the below commands in a shell.


What do I do if I want to go back to using the pool swap?

Remove the post-init command, then disable swap
swapoff -a


But what is this doing?

first we disable all current swap devices
swapoff -a

then if that worked, we replace the original fstab with the new fstab
mv /etc/fstab.new /etc/fstab

And finally, even if we failed to update the fstab, we re-enable swap, include late swap devices.
swapon -aL


How do you know this works?

When FreeNAS boots, the /conf/base/etc/ix.rc.d/ix-fstab script is run to regenerate the /etc/fstab file. The script replaces /etc/fstab with /conf/base/etc/fstab, which contains the default boot mount information, then it adds various mount options that are required according to the config and imported disks, and then finally it iterates over all imported pools and finds their swap partitions and adds an encrypted swap entry for each swap partition found.

This Post-Init command removes those swap entries safely, and then adds the swap file according to the FreeBSD handbooks instructions.

If you detach or import a pool via the GUI, FreeNAS will regenerate the /etc/fstab. This will mean that swapoff -a will no longer work to temporarily disable your swap partition. This is not a big deal.

Additionally, when you import a pool, FreeNAS will re-enable that pool's swap partitions.

Both of these issues can be resolved by re-running the Post-Init command, and will be resolved at next reboot.
Reactions: Basil Hendroff, Bozon and ac milton