Some relevant SMB items for U3

At the time of writing this U3 hasn't been released yet, but I want to give some advance notice of a few SMB related items so that we have a place to discuss any issues that arise after the release (I don't anticipate anything new for SMB because there have primarily been bugfixes.).

The following are a few items that might be of interest to you forum regulars who use SMB. These aren't official release notes, and don't cover the full scope of all changes in U3. As always, you should read those before upgrading.

1) I'm _not_ bringing in a new samba version this time. We had to bring in Samba 4.9 in U2 because 4.7 will soon be EOL upstream, and we needed to let it bake and test it ourselves before dropping it in FreeNAS.
2) ACL behavior related to DELETE_CHILD is changing in ixnas to be more windows-like. Those of you who switched to using it as a workaround for ACL issues with Unix permissions type should switch back to vfs_zfsacl prior to upgrading to U3.
3) There is a new vfs module shadow_copy_zfs. This one will become the default in FreeNAS 11.3. The primary advantage is that it will allow you to expose _all_ zfs snapshots. The primary caveat is that you _must_ unselect any snapshot tasks for a share prior to enabling the module. This is because shadow_copy2 is enable automatically when a snapshot task is selected and multiple shadow copy modules must not be selected simultaneously. Feel free to try out the module and PM me if you run into problems with it. Any early testing / feedback will be greatly helpful for making sure that it's well polished for 11.3.
4) If you are using ixnas, and want to experiment with setting user quotas, you can specify a default base user quota by setting the following share-level auxiliary parameter ('ixnas:base_user_quota=80G'). This will use libzfs to automatically set a 80GB ZFS user quota for the user (if one doesn't exist) on SMB tree connection. Basically, user quotas are automatically generated as they authenticate. Because of item (6) below, you will need to use the "zfs" command line utility if you need to alter an existing quota.

Some items that have been bumped back for U4.
5) Adding experimental support for wsdd (almost everything is there, and I can give instructions for enabling it to those who are interested).
6) Adding a dropdown for "SMB admin group". Members of this group will be added to S-1-5-32-544 (BUILTIN\administrators), and be able to manage the server through the windows "Computer Management" MMC snapin (even when the server is in a non-AD environment). They will also have access to view and administer user quotas through the native windows NT ACL tool and the command line utility smbcquotas (from remote linux workstation). The 'zfs' command is used to administer these locally.
SMB Permissions Overview

U3 has been released so bumping to make this more visible.
SMB Permissions Overview
K

(2) After switching from ixnas back to vfs_zfsacl prior to upgrading to FreeNAS 11.2-U3, can "vfs_zfsacl" continued to be used without hitting ACL problems with Unix permissions?
(5) Can you post instructions re: wsdd

anodos said:
U3 has been released so bumping to make this more visible.
Click to expand...

(2) After switching from ixnas back to vfs_zfsacl prior to upgrading to FreeNAS 11.2-U3, can "vfs_zfsacl" continued to be used without hitting ACL problems with Unix permissions?
Click to expand...

zfsacl is fixed in U2.1. You won't run into that problem again.

The wsdd support isn't in U3. The rewrite for FreeNAS as a AD domain member (not DC) has been consuming most of my time. Once you upgrade, PM me and I can send you instructions.
SMB Permissions Overview
E

I also been having a ton of issues with SMB and I also tested U3 and adding wide links turning off unix extensions, made a whole thread about it as well since I also use Active Directory I'm not sure if it's related to my use or just samba being completely broken. I even went ahead and done something unforgivable which is "upgrading" my production server to U3 in the hopes of fixing it and also trying to debug samba, now i'm gonna get all 25TB of data off of it to tapes and external drives and start over I just don't trust my install any longer.
Main Server:
HP z420 Workstation, 1x Xeon E5-2690v1, 128GB DDR3 1600mhz ECC Registered, 8x Seagate 5TB 2.5 Sata, 5x 860 Evo 500GB, 1x 970 Evo 500GB, LTO-6 Tape Drive, 2x Dell H310 IT Flashed SAS HBAs Windows Server 2019 Datacenter.
FreeNAS-11.3-RELEASE running on Hyper-V Gen 1 VM with 32GB RAM and drive passthrough. 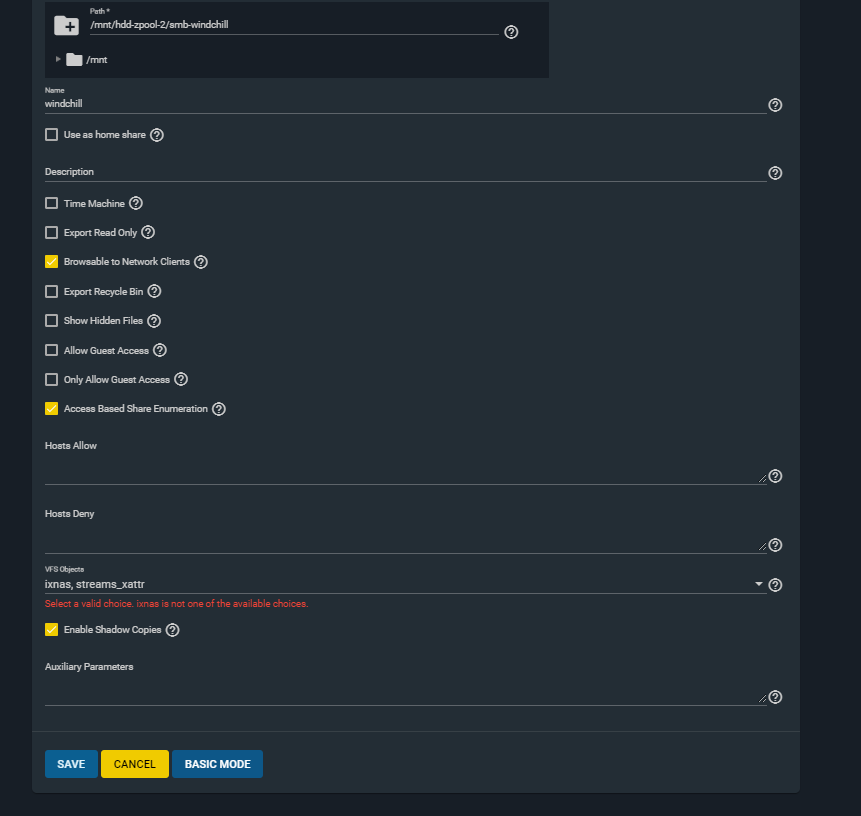